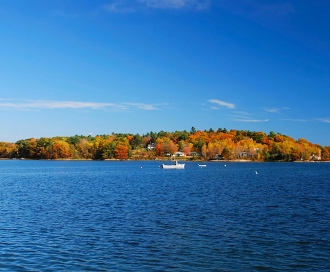 Governor LePage was born and raised in Maine.  He and First Lady Ann LePage raised their kids here.

Paul LePage recognizes that Maine’s environment must be protected.  It is critical for our quality of life, for our children and our economy.  It is not only a treasurer for the citizens of Maine it is a national treasure that draws people from all over the country and the world to enjoy our lakes, woods, beaches,  clean air, streams, rivers, and mountains.  We are literally surrounded by natural beauty.

If you harm our environment and violate the law you have the wrong Governor if you wish to get away with it.

He will also work to ensure science – not politics – is the ultimate guiding force in decision making.  Too many politicians invoke fear or controversy to raise campaign money or scare people into thinking more red tape is needed for the sake of red tape.  Some special interests also raise money on these fears.  The Governor is not interested in fear or having Maine serve as an outlier to promote a political agenda, he is interested in the actions of other states and the federal government in determining public policy.

One area of scientific concern is the use of chemicals. Governor LePage has noted Maine should generally follow the federal government’s lead in such matters as the federal budget for studying chemicals is large and bans impact interstate commerce, which is the Constitutional purview of the federal government.  For instance President Obama’s administration has failed to outright ban the chemical BPA repeatedly.  (source: Businessweek magazine) The Obama FDA stated as late as March of 2012, “findings cannot be applied to humans,” regarding BPA safety concerns.  In July of 2013 the federal government stopped BPA use in baby formula only after the “the FDA noted that the industry had already abandoned use of the chemical.”  The FDA added however that their scientific evidence “did not make a finding that BPA in packaging poses health risks.” (source: The Hill newspaper)